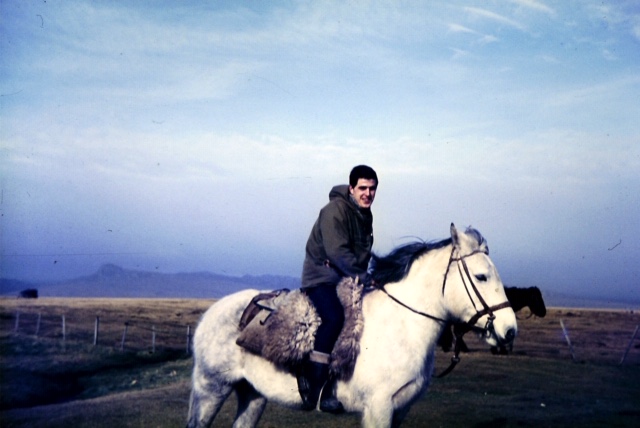 Looking back over time, it is surprising to find the number of occasions major changes have been sparked by a wave or some insignificant serendipitous event.

My old fashioned grammar school was unceremoniously merged with a large secondary school to become a major comprehensive school. In order for it to succeed it was, unlike the old grammar school, awash with cash. I along with about twenty five other students made up the first sixth form. One of the things we did without before the merger was a Careers Master! the one we now had was, even to me at 17, a total waste of space.

My journey to school consisted of travelling from one side of Sheffield to the other, two bus journeys of 35 minutes with a walk of ten minutes across the city centre. One Friday during the walk from one bus to the other, I bought a copy of The Daily Telegraph for 4d (Four old pennies, now worth slightly less than 2p in “new money”), It was one of the first newspapers to publish a colour supplement which came with the Friday edition. Inside was an article about V.S.O. Voluntary Service Overseas, an organisation which had been set up to provide the baby boomers with something to do while they waited their turn to go to university, there was a glut of applicants and a lot of students had to wait a year to gain a place.

The article showed the work being done by volunteers all over the world in places like India, Fiji, Turks and Caicos, and many other exotic locations, all in warm / hot climates. After a Yorkshire winter of trekking for an hour and a half to school and an hour and a half back home, a year teaching in a hot sunny climate, hopefully on a tropical island sounded wonderful, maybe the school room would be on a beach. I decided that this was just what I should do! So I went to see the aforementioned Careers Master. Firstly he had never heard of V.S.O. when I filled him in with details I had found out, his reaction was “No they don’t take anyone from a comprehensive school, and certainly not from Sheffield, with your high marks in Maths you should be looking for a career in banking instead of wasting your time with this”

My reaction was to get up and walk out on him.

Luckily a couple of the teachers who had come with us from my old school thought it was a great idea and helped me with the application, I attended an interview in London and a few weeks later I was accepted and on a training course at the Froebel Institute in Roehampton. I took great pleasure in informing the Careers Master where he could shove his job in a bank.

However a major disappointment was to come when I received my posting to find that out of more than three hundred postings, two, which each had three volunteers, were in COLD climates and I was going to one of them. My two co-volunteers were unsure where The Falkland Islands were, but as part of my Geography A level syllabus was Latin America, I was aware they were right down at the tip of Argentina, next stop the Antarctic!

V.S.O. took advantage of unsold seats on airlines at a very reduced price so with only two days notice, myself and my two co-volunteers were on a flight to Amsterdam there we changed planes and caught a flight to Montevideo, where we stayed for three days before catching the R.M.S. Darwin to Port Stanley, a four day sail in good weather, but there isn’t much good weather around Cape Horn, it took us nine days.

We arrived in Port Stanley on a Sunday morning to be welcomed to one of the most friendly places on earth, a population of around 2000, 1000 in Stanley and the other thousand scattered around “The Camp” or the rest of the more than 100 hundred islands that make up the Falklands. By comparison my school had 2,500 pupils!

Before being sent out into The Camp on our various teaching tracks, we spent a week in the school in Stanley to familiarise ourselves with the Falkland Education system and syllabus. We were to teach in various small hamlets (settlements) and several shepherd’s houses (outside houses) which were miles from anywhere, sometimes just one pupil, sometimes six or seven all different ages. We would stay there for two weeks then move on by horse or seaplane leaving six weeks of homework to be done for when we returned. No electricity, no radio except for three hours a night broadcast from Stanley if your batteries held out!, and no telephone. (This was years before anyone had even heard of something called the internet. If you wanted to contact the UK you could send an Air Mail letter, Air Mail was collected from Stanley once a month and travelled by the R.M.S. Darwin to Montevideo and then on a flight to the UK, mail from the UK was held in Montevideo for the next sailing of the Darwin, Its’ arrival in the Islands was eagerly awaited and you can imagine the disappointment when after one arrival of The Darwin we heard there was no mail because of a postal strike in Uruguay!

At about 11.00 a.m. on the Wednesday morning of our week of familiarisation in the school in Stanley, a plane flew low overhead, i thought nothing of it but everyone else went rushing to the windows and then out into the playground to see the plane doing a return trip over head. Aircraft never flew over or near the Islands except for the two, six-seater Beaver sea planes belonging to the Falkland Islands Company. Thats when I realised that there was something very wrong; an Aerolineas Argentinas DC 4 flying so low over Stanley was over 350 miles off course was either in trouble or it was there on purpose for a much more dubious reason. It passed overhead a couple more times and then made a very bumpy landing on the Stanley race course just behind the school. The racecourse was reasonably flat but mostly soft peat. Many Stanley residents ran to help thinking the plane had landed because it was in trouble, but backed off quickly when several armed terrorists emerged from the plane, they belonged to a far left group known as EL CONDOR. They said they were taking over the Islands which would be known as Islas Malvinas. and demanded that the authorities surrender to them. They were shocked when the Acting Governor said no and that they themselves should surrender.

It was agreed that seven Falkland Islanders should be exchanged for the 26 passengers who were allowed to disembark and were sent to lodge with local families as the Islands had no hotel. The stand off began and the plane was surrounded by members of the local defence force (Home Guard) . That evening on the local Stanley radio an announcement was made for all able bodied men between 18 and 60 to report at the drill hall at 5.00 a.m. in the morning to relieve the Defence Force who had been surrounding the aircraft for 18 hours. Myself and the other two V.S.O’s duly reported, along with about 50 other men. We were given rifles and ammunition and taken to the racecourse and split into 10 small groups and allocated positions around the plane replacing the exhausted Defence Force. Our group of nine were on the south, seaward side of the aircraft and had the cover of a low wall. I had never even held a gun or a rifle until then and looking back it all seemed like a bit of an adventure, hi-jacking of aircraft was almost unheard of and so we had no point of reference. It was a very uneventful day, nothing happened except we got very very cold, some food and a hot drink was brought in the middle of the day and we were very happy when the Defence Force returned at 5.00 p.m. to relieve us.

Shortly after we left the terrorists, now totally demoralised, hungry, tired and cold surrendered and were taken off the plane and held in the Roman Catholic Church Hall, the Island’s jail only having room for one prisoner. Negotiations took place between London and Buenos Aires and a few days later the Argentine Navy sent a boat to pick them up, they had to be ferried out of the harbour to the boat it took two attempts to get them on board because of the rough sea, they were more than a little sea sick by the time they managed to get on the ship, from the report of the Falkland skipper of the boat taking them out to the ship, the Argentine Navy were not impressed with the terrorists and seemed embarrassed by them.

A few days later after taking out all the seats and anything else that could be removed, the aircraft was pulled out of the mud by the two Island tractors and a lot of man power the Captain and Crew managed to take off from the racecourse, he flew over Stanley twice dipping his wings to thank the Islanders for all their help.

After that somewhat surprising welcome to the Islands we started our year of teaching. I had a wonderful year with a lot of “firsts” … chasing penguins, being chased by an elephant seal, finding a dead whale washed up on the beach, eating penguin eggs, butchering a sheep for dinner, milking a cow, digging and stacking peat, crossing a wide creek on horseback, (not knowing how deep it was) and landing in a sea plane on small inlet by Sea Lion Island. When we left the Islands to return home our adventure continued, a general strike in Uruguay caused a four-week delay there, during the delay, we spent some time teaching at a school in Paysandu which specialised in English. Even the flight home on British Caledonian Airways didn’t go as expected, a problem at Heathrow meant we had to divert to Gatwick.

It is amazing what the sudden impulse wave to buy a newspaper and the pessimistic advice of an idiot set in motion. 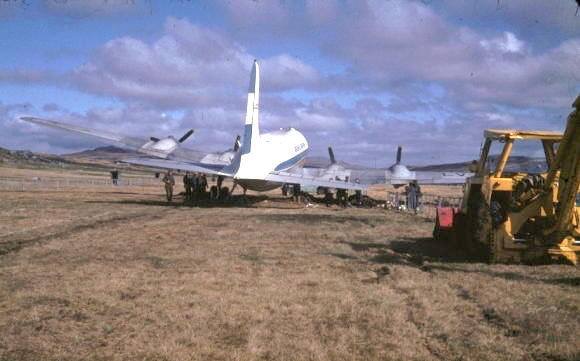 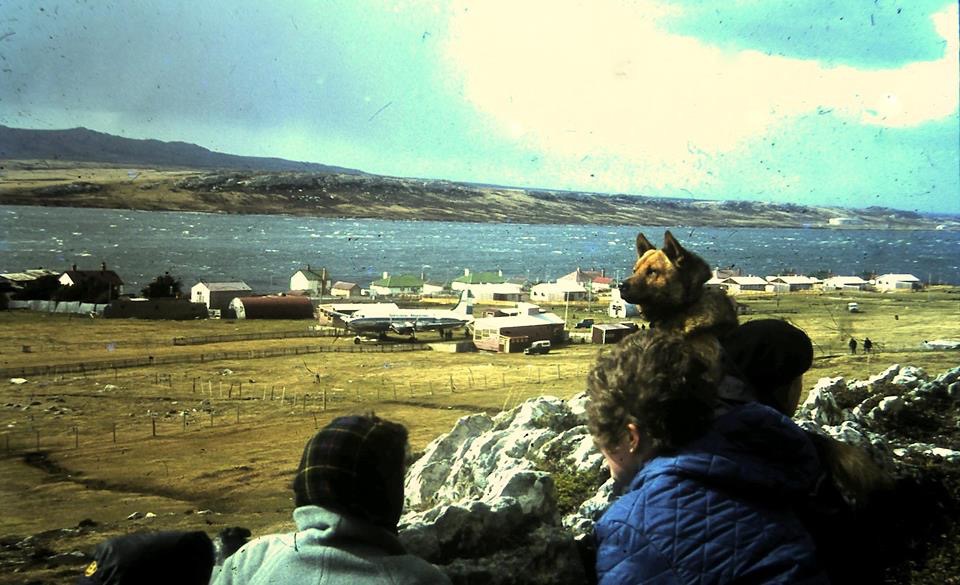