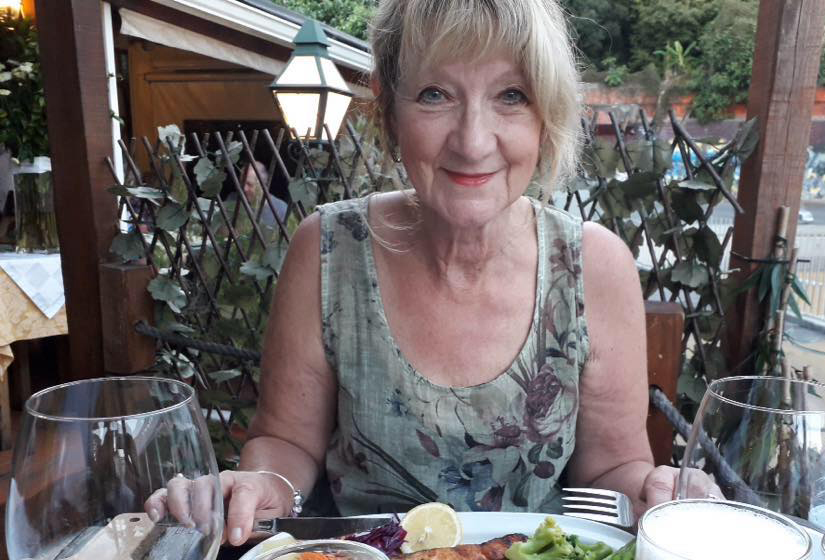 Can you teach an old dog new tricks? I’m not sure this is an actual wave back. I will decide this when I get to the end of my story which is not just about me but about six lovely people who remained positive and jolly when they really had nothing to look forward to. Here goes…

A while ago on Facebook there was a post doing the rounds asking for people to name their favorite books. You know the sort of thing, a book a day, a nomination a day. I succumbed to it and on one of my days, I decided to nominate a friend I used to work with. One of the books on her list was « Tuesdays with Morrie by Mitch Albom ». It is a true story. I decided I would read it and immediately purchased it on my Kindle and there it stayed until last week when, for some reason, it popped into my head. I started reading it. Had I realized it was about ALS (Amyotrophic Lateral Sclerosis or Motor Neurone Disease as we call it in the U.K.) I would have read it sooner. It brought back so many memories some happy, some sad.

Here’s my Waveback or call it what you will. For me it was an awakening.

In 2009 I was 60 years old and retired. It was also the year I met my husband. I had lived and worked in London for most of my life. He was from the Wirral and in 2010 I moved there to be with him. I had always done some sort of voluntary work in my life; raising funds for an adventure playground, secretary of the PTA at my kids’ school, helping slow-learners in schools to read, even sorting secondhand clothes and arranging jumble sales, so I had already decided that I would continue to do voluntary work when I retired but I wanted something that would be interesting and satisfying. The need to help people and make a difference has always been with me, hence my career in Human Resources work, so I scanned the internet looking for a charity which suited my skills. I came across Motor Neurone Disease. I knew nothing about it other than Stephen Hawkins had it and David Niven died from it. I read on. They wanted people to befriend and give family support to people suffering from the disease. Yes, they already had support. Professional support, teams of doctors, nurses and home-carers; busy people who swiftly moved on to the next patient. The MND Association were looking for people who had the time to visit, listen and chat and, at the same time, be able to highlight any problems with the appropriate medical agency. This role had my name all over it!

Before I go any further, I wish to make it clear that this is not a fund-raiser page or a plea for donations to the MND Association, it’s just a paragraph in my life but an important one that needs high-lighting as it changed my outlook on life.

To continue – I applied for the role, passed the interview and attended a four-day course in London. Most of the people on the course had lost someone to this evil disease. Statistics show that the disease attacks people aged 50+ but, of course, there are exceptions and I met young women, in their 20s and 3Os, some with children, who had lost their partners at an early age. I learned a lot about the disease and people’s strengths during those four days. There were tears as people related their own stories of loved ones lost and laughter when they recalled a happy or funny memory. I was surprised at their resilience and determination to carry on in such circumstances and asked myself if I could be that strong.

On returning to the Wirral I was given a caseload of six clients. I saw them once a week, twice if they wanted. All showed the same strength and determination to fight the disease even though, deep down, they knew that MND would destroy their body, bit by bit, and that they did not have long to live. After diagnosis, patients are expected to live no more than two years.

My two favourite clients were Bill and Beryl. Bill was an elderly gentleman who lived alone as his wife had died a few years earlier. He could still shuffle around the house with the aid of a cage and breathing apparatus strapped to his back. He would greet me with “I’ll make the tea. Did you remember to bring the biscuits?”. He did make the tea, with difficulty sometimes but he was determined to do it. I would always bring the biscuits. I would sit and listened to him chat and reminisce about « the good old days ». One week he told me how he and his wife loved to dance and they used to go to classes regularly. So from then on, whenever I visited, on would go his Frank Sinatra records and we would dance, or rather shuffle, round his little lounge. I cried and cried when I received the phone call telling me that he had died.

My other favourite was Beryl and her husband John. Beryl was already in a big wheelchair that kept her upright, when I first visited. Their little terrace house had been adapted to make room for a lift to enable her to go upstairs to bed. I loved visiting this couple. Beryl was 69 and had owned a wool shop when she was younger. Knitting is one of my great pleasures and we would chat for hours about what we had made, patterns, wools and knitting in general, while we left John to make the tea. Beryl had lost most of the movement in her limbs and had difficulty eating. She knew the disease was spreading fast but she remained jolly and positive about life and talked fondly of her husband, children and grandchildren. As the weeks progressed she was unable to eat and was fitted with a PEG. She could still talk though, and smile. She used to say “All I want is to reach my 70th birthday next year”. I popped in to see her on her 70th birthday. She was reclining in her big chair. Her hair had been done, make-up applied and a manicurist was painting her nails bright pink. She told me the full beauty treatment was a birthday gift from her family as she wanted to look her best on her birthday. She was determined to enjoy herself even though, by this time, she could hardly move or speak. I continued to visit weekly. We still managed to “chat”. Even though she could hardly speak, she communicated through facial expressions and eye-blinking, and John always seemed to know what she was saying more than I did. A few months later, as Ian and I were driving through France to come and sign the contracts to our house, I received a phone call from John to say she was in hospital. I felt so bad that I wasn’t there to see her or support him. I wasn’t there the next day either when he told me she had died.

I lived on the Wirral for two years before moving to France. In those two years all six of my clients deteriorated and died. It’s an evil disease and I hope a cure is found soon. Yes, the work made me feel sad at times but I felt I was making a difference in their lives and it was also rewarding work. I only wish my French was good enough to be able to do the same voluntary work here in France but, alas, it is not.

As I said at the beginning, I’m not sure what Waveback is but if it is about sharing experiences about being positive and determined when all hope is gone, then this is it.

If it is about, no matter how old you are, you can still learn new skills and be useful, then this is it.

If it is about being aware of other people’s suffering and trying to do something about it, then this is it.

If it’s about making changes in your life, then this is it.

It’s 2020 and I’m 71 years old. I have lived in France since 2012. I look in the mirror each morning and I see wrinkles, age spots and grey hair and just as I am about to moan about them I remember Bill and Beryl and realize how trivial I am being and how lucky I am to be in good health and alive.

I still do voluntary work. I learned more new skills and now I run English workshops at a local school. I love it. It keeps me connected to the youths of today and that, in turn, makes me feel young.

Can you really teach an old dog to learn new tricks? You betcha!